Tuesday (aka day three of our honeymoon), we finally attempted to fulfill our itinerary. First, we went to Zabar's to buy some black and white cookies before heading off to Westside Market to buy some cheese and crackers and Venetians (aka rainbow cookies) which, for some reason, Zabar's did not have. Bah humbug and color me disappointed but I was content with our our purchases. We bought these foods because we were expecting guests the next day.

But I'll write more about that tomorrow.

We also went to Barnes & Noble on Broadway and 82nd where Rob insisted I not buy any books or even bargain things for Bibi or Isabelle (granddaughter and niece).  Take note:  this was the beginning of Rob's talking me out of buying gifts.  Why did we got to B&N?  Well, once upon a time hotel rooms would have stationery and envelopes with their letterhead on both.  I even packed some stamps, knowing I would send something to Bibi.  So imagine my chagrin when I made this discovery.

It makes sense, of course.  Why would a hotel need to supply snail mail supplies when we now have email and texts?  I was blindsided by tradition and I had planned on sending something to my granddaughter.  Nothing was going to stop me.  I found a lovely notecard with pretty envelope.  Perfect for enchanting my charming granddaughter.

After the shopping, we headed to the American Museum of Natural History.  Finally, a museum!


There are certain parts of the museum we simply had to see.  Rob particularly wanted to see the Blue Whale so we hit the Millstein Hall of Oceanic Life where he took a lot of pictures.   But the best pictures of the whale are well and truly found on a postcard.  Less personal, perhaps, so if you can buy the postcards and take pictures, you get the best of both worlds.


This splice from a tree was a very important stop.  When I was a small child and my mother took me to the AMNH, I always dragged us to this tree where I would flap my arms (like a bird/duck/something-with-wing) and make a wish.  My mother has no idea why I did this and I have no recollection of my reason for doing so but I do remember standing in front of this tree remnant, earnestly making my wish.

Needless to say, I performed this personal ritual and we took a picture of the tree.  The marks you see record the many years it had lived before someone cut a chunk out of it.  (I like to pretend the tree fell and they merely took advantage of this huge already dying tree.  I haven't looked at the information about it because ignorance is bliss and I truly don't want to find out that someone cut down this stunningly huge tree simply to drag a piece of it to be displayed in a museum.) 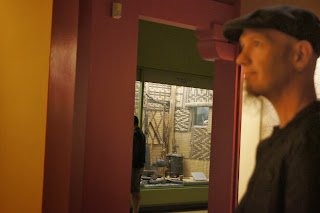 Rob's reaction to most of what we saw was, truth be told, rather blasé.  If I didn't know him better, I might have taken offense.  But the truth is, Rob is typically even keeled and his response to the exhibits was not unusual for him.  That he took as many photos as he did is proof of his appreciation of what he saw.  I had a hard time taking a picture of him when he was not taking a photo himself so you probably won't see many more of these.

The choice of museum was intentional because we had more on our agenda.  I lay down for a bit before we headed out the door again, this time taking a bus, to Times Square.


I had chosen a deli where Rob and I cold get some food.  He wanted a hot pastrami sandwich while I was eager for the cheese blintzes.  Rob's glucose levels precluded our plans and we ended up at a different deli where he had his pastrami sandwich and I chose a simple soup because they didn't have any blintzes on the menu.  (Insert ominous music here.)

After dinner, we had time to spare so we walked around a bit.  First, we sought out the Ambassador Theater, where we would be seeing Chicago!  Oh boy!  We walked around as long as I could bear it and we then went to the theater where we had to stand on line.  There's was a lovely German girl in front of us who was so excited about seeing a real New York Broadway show.  She told us that there are only ten musicals in all of Germany, that her father had sprained his ankle which is why she was seeing the show by herself, that her mother loves musicals too but was still in Germany, that she was amazed that there were so many musicals in so few blocks, that she loved Russel Crowe's singing voice (?), and tomorrow she was going to see Phantom of the Opera even though the movie was terrible; but she loved the music and was practically bursting with excitement.

Sneaky devil that he is, Rob took a pic of the show's orchestra.  This gives you an idea of how close we were to the stage.  We had front row mezzanine seats and, sitting to my left, was a couple who have a home in upstate NY but have a vacation home in GA.  Small world!

Before the show started, Rob was making several comments about the sound system and, during the intermission, he explained to me that the funny things on the foreheads of some of the performers was a microphone.  (Remember when Broadway performers didn't use, let alone need,  microphones?  I do.)

The show was wonderful.  I absolutely adore how Ann Reinking retained Bob Fosse's superlative choreography. Bianca Marroquín, in the role of Roxie Hart, was brilliant.  Rob agreed.  I thought Amra-Faye Wright was also wonderful.  There was one male dancer who really nailed Bob Fosse's style and watching him was a pure joy.

For the insatiably curious, here are two videos that show how Bob Fosse choreographed the original production of Chicago and how Ann Reinking modernizes it all without losing the tone.

Anyway, the most remarkable thing in all of this third day of our honeymoon is that Rob, who has an uncanny knack for falling asleep in a theater, did NOT fall asleep at all during this show.  Maybe the key to Rob's being alert is Bob Fosse inspired choreography.  I may have to test that theory with a few dvds.  Hmmm . . . .