Yes, a miracle occurred.  I finally had the week of normalcy (relatively speaking) that I had hoped I would have eventually.  Of course, we mustn’t overlook the fact that we a normal week includes a holiday and two birthdays.

Maybe that’s as normal as it gets around here.

Tuesday was game day and we had two RSVPs so we were expecting three adults and one Bibi. We also had plans to bake a batch of cookies for my mother.   An unbirthday gift, if you will, because she doesn’t celebrate her birthday any longer.  So Tuesday we baked a most delicious dozen cookies.  Sugar free, naturally.  We made sandwich cookies, heart shaped with the top cut out, as you can see.  The top layer was dipped in a dark chocolate and between layers we put sugar free preserves—raspberry and apricot.

There was enough cookie dough to make a few extras for our expected company.  But then our expected company cancelled and forgot, depending on whom we were expecting.  Then an unexpected person who as invited said he could be here so we were happy to have someone for dinner and cookies.  We never did get around to playing a game, however.  I’d be more disappointed if Chris’s company were not a delight. We enjoyed chili for dinner, had some wine (Rob doesn't drink so that was just me and Chris) and ate the extra cookies which were yummy, if I do say so myself.  (And I did.  In writing. So there!)

That was Tuesday and Wednesday was uneventfully spent studying and such.  The article on the Wall Street Journal website went live on Thursday, Valentine's Day, but I didn't notice until Friday.  I have to reiterate how remarkable it was to have my photograph taken and to feel so completely comfortable the entire time.  I honestly must commend David Walter Banks for doing the nearly impossible and I would highly recommend him to anyone seeking a photographer.  Major kudos to him.

Check out his website. Seriously.  It's worth the bother.

(Aside:  Curiously, Rob and I both shared links to the article but his links received more comments and such than mine.  Not sure what that's about.)

(Another Aside:  I haven't read the article.)

Valentine’s Day was lovely because Rob wasn't working.  We had plans to make a special dessert—no sugar added cheesecake.  I’m including the recipe below.  But before we got around to making dessert, Rob had a little fun at my expense.

Normally, he leaves a card and small gift for me on my desk or on my keyboard.  This year, however, there was nothing.  I looked around a bit but not extensively.  I didn't expect anything.  I suppose that’s why I stopped after a cursory glance around the most obvious places.  I had a card for Rob which I tucked onto the keyboard of his laptop.  I don't know that he expected one at all let alone did he know I'd picked it up the day I worked with Chris with his résumé.

(Aside:  Chris is now gainfully employed.  That's why his being part of our game day was not assumed.)

It wasn’t until after he woke up that he slipped a gift onto my laptop as a surprise—a necklace which I am currently wearing. I guess now that we're married he thinks he has to be more subtle or sneaky.  Either way, I was genuinely surprised.

Over all, it was a good day even as Rob and I bickered and teased and laughed and had fun making our dessert.  I even managed to do some studying in the afternoon.  Not the most romantic way to spend a supposedly romantic day but Rob and I send random "I love you" texts and smooches all of the time, kiss one another goodnight before we go to sleep, and try to do thoughtful things for one another almost each and every day; it's hard to feel more loving than we already do. The only thing that really made this day unique from any other day of the week was our messing with making something special for dessert.  Otherwise, in all honesty, it pretty much felt like any other day.

I sent my friend Love a couple of texts, with the intention of calling her to wish her a happy birthday.  Her fiancé had been in the hospital and only come home that Monday.  I was glad to know he was home and she would not be worrying about his convalescing int the hospital on her birthday.  Even though he could not actively participate in her special day, being still stuck in bed and all, he was home again.  And if I was disappointed that she and I did not have the opportunity to talk with one another, I was content knowing she was not spending it alone.

(Aside:  Frankly, some of my best Valentine's Days were spent blissfully alone (albeit with three children) but when you are in a relationship being alone on any holiday feels especially lonely.)

And the dessert was delicious.  We even had enough leftover filling to make one for our neighbors and another for Erin.  So, for the record, the recipe below will make four personal sized cheesecakes.

Friday Rob and I tried to run some errands but it was more like a hunting expedition wherein we came home without supper.  Or in our case, without shoes for Rob.  It wasn’t a total loss.  We were able to find a card I needed.  Of course, between running errands and game days and baking cookies and baking cheesecake, I have fallen behind in my anatomy review.  I have the new coding books, which arrived on Friday,  and now I need to mark them up and study the updates and changes. My falling behind in my review . . . I'm trying not to let it distress me.  Pressure to try to catch up of course . . .

However, Saturday was not the day for me to try to catch up with my studying.  I had the pleasure of Bibisitting, which is always a guaranteed joy.  But that wasn’t until the afternoon and into the evening.  Firs,t I walked two miles with Kanika, catching up on things and trying to burn some calories.  Around 11, I called and talked for a while with Love.  She had a lovely birthday in spite of the circumstances, thanks to a trip to the local pub and some good friends, one of whom joined Love at home that evening. Remember what I said about holidays feeling lonely when you're in a relationship but alone?  That holds doubly true for birthdays.

When Bibi came, we had a wonderful time.  We played games, colored pictures, did a shape puzzle thing, sang songs, explored the back yard, and all the fun things one does with a five-year-old.  She could have gone with her mother to a baby shower but she decided I am more fun than a baby shower which she ended up spending the afternoon with me.

While Bibi as here, she said I am very exquisite and, at one point, asked me if I was being sarcastic.  I wasn’t being sarcastic and Rob agrees, I am exquisite (albeit not very exquisite).  As for me, I’m just reveling in her vocabulary, something I suspect comes from my son remembering his own childhood and how I would use as precise a word as I could never assuming a child was too young or dumb to understand while trusting all children are curious enough to ask questions when they want to know more.

For dinner, the three of us had spaghetti and garlic bread.  Brianna is a fussy eater so it was especially delightful to watch her eat with enthusiasm.  She did not finish everything but she came very close to doing so.  Speaking of coming close, Bibi normally finds some reason to cry whether from frustration or exhaustion.  She came close at one point but almost immediately stopped as if it were too much trouble.  She didn't even cry when it was time to leave!


As Rob says, it isn't a Bibi-visit if there aren't any tears.  I guess this means Joe and Erin owe us another one.

Saturday, the timing of everything was perfect.  Erin arrived to take Bibi home early enough that I could tuck a quick study session in before going to bed.  This week, I’ll do my utmost to catch up in my studies and start reorganizing things.  Marc left a bit of chaos in his wake last weekend and, this week, I don’t anticipate anything too surprising happening.  Of course, one can’t, by definition, anticipate a surprise.  Still, assuming all goes well, I’ll start marking up my new coding books tomorrow, I’ll write a couple of letters and emails and send them off to people, and by this time next week I’ll feel productive rather than scattered.

If nothing else, I now know that normal weeks do exist and they can happen to me.  I can now look forward to the next time it happens, even though I refuse to assume it will happen any time soon.  Would be nice but I'm not going to hold my breath. 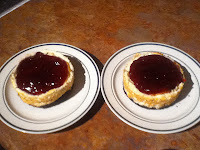 
This will make four 4-inch cheesecakes.

Chocolate Cookie Crumb Crust
We were lazy and we used Murray's Sugar-Free Chocolate Creme cookies.  This required scraping the "creme" from the center so I'd have rather made some chocolate cookies and then crumbled them to make 1 cup of cookie crumbs.  However, we'd just made a lot of cookies and making still more seemed like overkill.

1 cup cookie crumbs (you can use graham cracker crumbs, if you prefer)
2 tablespoons margarine, melted

This is enough to make a crust for two 4-inch cheesecakes.

Raspberry Topping
I'm afraid I don't have precise measurements for this because I tend to just do it without thinking.  Blend raspberries (you can use frozen if fresh are impossible to obtain or simply too costly) into a purée and transfer this to a small saucepan.  Warm the purée.  While the fruit is warming up, take about 1 tablespoon corn starch and dissolve it in some water (about 1/4 cup).  When the purée is warmed through, pour the cornstarch and water into the pot.  Cook over low heat until thickened.  If using fresh raspberries, save a few for a touch of elegance on top.  We did not have fresh so we had no whole berries to use.  It was delicious nonetheless.