This May Take a While

I'll be back soon.  In the meantime, I'm still healing. 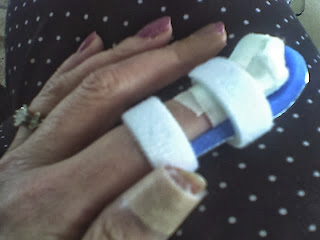 I kinda sliced my finger Tuesday.  I did it after I exercised though.  This picture was taken the morning after.  Hopefully on Sunday I can write the full story for the weekly update thing.  In the meantime, OUCH! 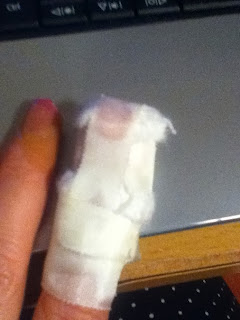 Someday My Husband Will Join Me

This is the week, even the day, Rob says he’ll start exercising.  He’s one of those “Someday People.”  You know the type.  They plan to start working out on Monday or the first of the month or talk about joining a gym for the new year because this time they’re serious.

And Rob usually is.  When he gives me a day he’ll do something, it gets done.

I, on the other hand, am a “Tomorrow or Else” person.  I don’t beat myself up for dropping a ball one day but I’ll be damned if I don’t pick It up the next day.  Or try to anyway.  After all, at the rate I keep hurting myself, it gets harder and harder to pick things up again.

So the week before last I had the problem with my knee and this past week I jammed my thumb so badly that I couldn’t hold things, not even Snowdoll’s leash.   Do you know how hard it is to do bicep curls when you can’t hold things?

I’m injury free and today’s the day Rob said he would start working out.  I’ve put off any strength training until today. For one thing, it forced me to let myself heal. For another, I didn’t want to go into exercising together with sore muscles.  I was still doing my morning yoga and I was still walking Snowdoll so it’s not like I was doing nothing.  I simply wasn’t doing everything.

But today is the day.  Or so Rob says.  Either way, I have my lifting gloves ready and I’ll be doing what I want and need to do to feel as fit as I can be.
Posted by Satia at 8:04 AM 2 comments:

I think, sometimes, of the things we carry.  The experiences we had in our childhood live on like scars and not all scars are the result of negative things.  Fond memories we carry we try to relive with our children, family traditions move from one generation to the next, even the storybooks we had read to us as children are the ones we seek out for our grandchildren.

These things matter.  And yes, there are scars that come from the painful experiences, the hurts and even betrayals.  It’s probably easiest to learn from the unintentional suffering and I can say with full assurance that my mother did not want me to be unhappy.  Head over heels as she was, it was hard to see how I might be feeling and the things I was experiencing.

But those experiences were my lessons.  I tried to make my children a priority when they were young even though I understood how hard it was for my mother to balance being a single mother, working to keep a roof over our heads and food on the table, with furthering herself and her own life.  She put herself through nursing school even as she paid for me to be in nursery school.   And she did all of this at a time when being a single parent, an unmarried woman, was shameful in the eyes of society.  Her own father had disowned her for having a bastard and still she persevered.

I wasn’t the only one experiencing feelings of loss and abandonment.

Early in our relationship, Rob confronted me with how he felt unappreciated, like he wasn’t a priority in my life and I snapped.  I told him that he wasn’t a priority in my life, my children were.  “And when they no longer need me to make them my priority, you still won’t be the center of my universe because I’ll by the center of it. If you’re lucky, I’ll let you orbit around me.”

Yep.  In the heat of the moment and my unforgiving anger, I was actually that eloquent.  Go figure.

And that was the truth of it.  For me, nothing would be or could be as important as my children.  I tried to keep it that way although I knew I had to start letting them go.  If I couldn’t provide them a stable home (and how stable can a home with an alcoholic be?), I tried to create stability through rituals and traditions. From my relationship with my mother, I knew that giving them a foundation was as important as giving them love.  If we moved from place to place, even state to state, they had to know I would be there every step of the way.  Especially when their father started going to jail, and they would wake up without him, and I couldn’t tell them when or even if he would be home.  Nothing was stable and it felt like a fight, trying to hold our fragile family together.

So when you read in my blog about all of the little things we do for birthdays and the holidays, it’s mostly because I made some really stupid choices when it came to falling in love.  No wonder I don’t begrudge my mother her choices.  How could I?  Such hypocrisy could not hold and some things, like blame, I choose not to carry.
Posted by Satia at 7:45 PM 12 comments:

Oops, I did it again.  Remember earlier this year when I kicked my finger and lost the use of my left hand for a while?  Well, this week, while I was making the bed, I jammed my thumb into the wall.  It wasn’t until the next day I realized that my wrist had some inflammation and only then because I felt a surprising pain when I tried to grasp something.

It kept me from being as productive as I’d hoped to be but it didn’t stop me altogether.  I’ve been participating in a memoir writing challenge.  So far there are six pieces I’ve put up and, to be honest, sometimes just typing them out was all I could manage because of my stupid wrist.


I’m not sure what the connection is but I managed to forget to post some of my blog posts, even some of my honeymoon ones, because of my stupid wrist.  There are twelve posts about my honeymoon, not including the intended itinerary from which we strayed nearly as soon as we landed.


But my wrist wasn’t the only thing that happened this week.  Erin, our daughter-in-law, had a birthday.  She’s now 26 celebrated her official birthday with her family.  We will celebrate birthdays on the 25th.  I ordered gifts for the boys but I already have a pile of things for Erin in a closet.  Oh boy oh boy oh boy!  I can hardly wait.  There was some bad news for Erin this week so it’s good she had a reason to be happy, a birthday to celebrate, to keep her from focusing too much on the disappointment and her anxiety.

And Rob and I bought the lamest Halloween costumes ever because we have a party to go to.  Then we were invited to a second party for the same day, one with a Mardi Gras theme so our lame costumes now have a new layer of weirdness.  We’ll be adding masks and beads to what we’re wearing to the one party and, since the costume party is closer to our home, we’ll go to the Mardi Gras one first.

When was the last time you heard me write about Rob and my going to a party?  Ages right?  Yep.  It’s been a while.  Typically Rob has to work Halloween weekend so we stopped dressing up for Halloween but this year all that’s changed.

I promise I’ll let someone take my picture but don’t get too excited.  We seriously bought some lame costumes.

And we went to a library book sale where I bought books books and more books.  I could have bought still more books but Rob had hit his limit before I did and, although he was willing to let me stay there without him, I was not inclined to do so.  (I’ll be sure to mark any relevant book reviews accordingly in my book review blog but don’t expect much.  Most of what I bought was for Bibi.)

Not the most exciting week but one full of writing through the pain.  It shouldn’t be so hard to make a bed without injuring one’s self to the point of losing a fingernail but clearly I’m exceptional.  I’m accepting this as further evidence of my being ill designed for domesticity.  It’s a wonder I am married, come to think of it.