Abstinence leaves room for observation.  When I was working with my doctor and a nutritionist to see what improvements could be made in my diet to help me lose weight.  The only problem they could find with my diet was that I wasn’t eating enough calories.  So it doesn’t surprise me to say that, although I am hungry, I don’t feel that I’m consumed with hunger. The MC drink itself is tasty enough and the cup of peppermint tea was a lovely change of pace.

Because of Rob’s diabetes, our meals are scheduled.  We eat lunch and dinner at the same time every day.  I am usually up earlier than he is so my breakfast is earlier. Otherwise, we eat almost everything together.  I also snack, typically on cheese or mixed nuts or raw veggies.   Sometimes, I “remember” to snack when my hands start to shake because of low blood sugar.

But I noticed the other day, as I was preparing the food for the dogs, I realized that I have gotten into the habit of having some cheese whenever I feed the dogs.  Is this just another way for me to schedule more food into my diet?  Or is it a habit to eat something when I’m feeding the dogs?  Hmmmm . . .

When I ease myself out of the MC, Rob and I are going to be looking more closely at our portion sizes.  He found something on ebay about which I’ll be writing more after the cleanse. In the meantime, I confess I’m finding the whole deprivation thing easier than I thought I would, especially given the lack of variety in what I am allowed to enjoy.  But Westen says that the most challenging days are typically the second and third and, so far, I’ve only made it through the second. We’ll see how today goes.
Posted by Satia at 8:00 AM 2 comments: 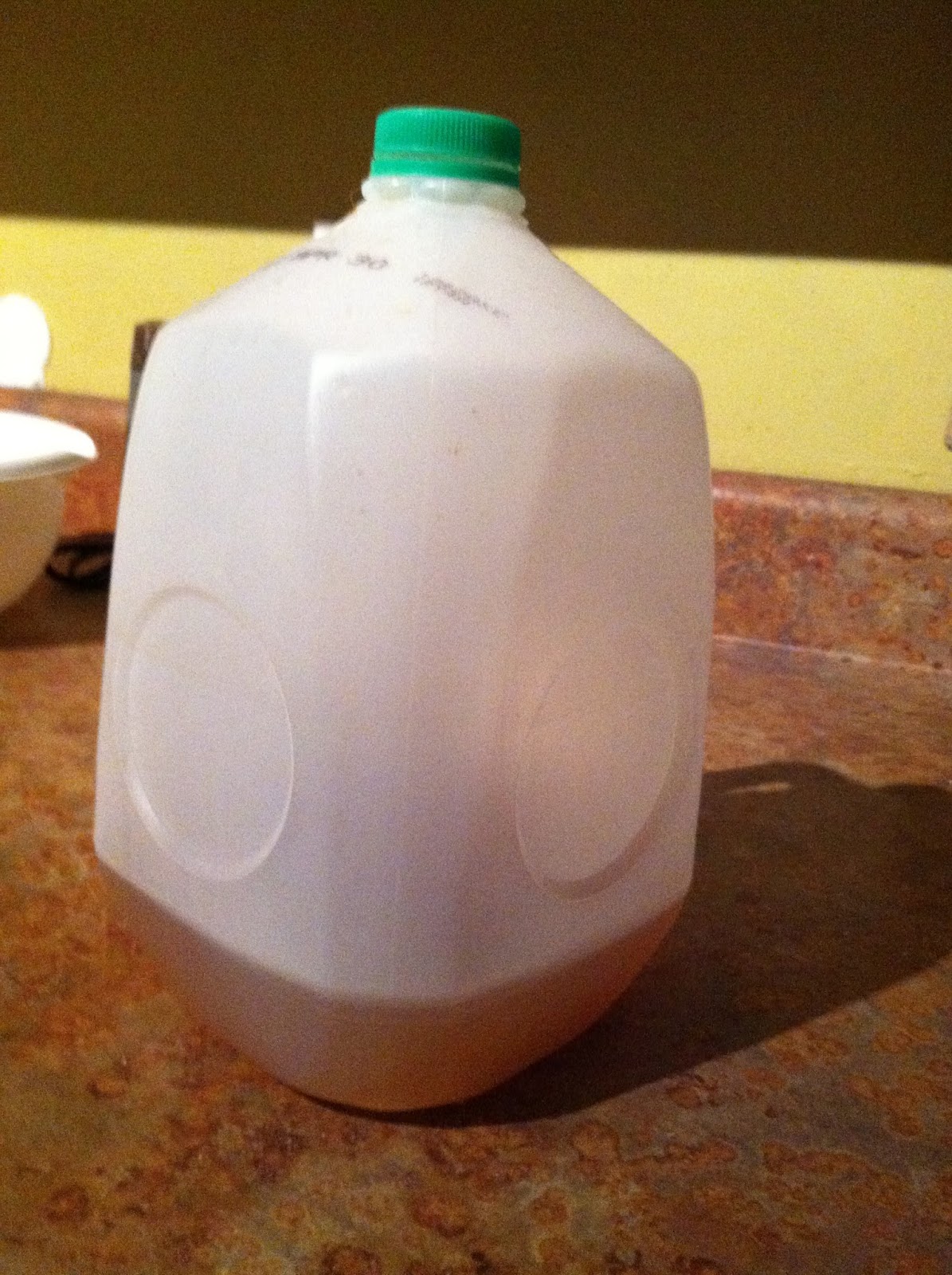 You know how in those movies where people are lost at sea and dying of thirst they are warned “Don’t drink the saltwater?”   There’s a reason for that and, if you know the reason, then you’ll fully appreciate why the first part of the MC is unpleasant.

The night before I had made my Salt Water Flush (emphasis intentional) to ensure the salt fully dissolved.  It worked and, to be honest, the SWF was not as unbearable to drink as I had expected.  Westen recommends using a straw to sort of force the drink to the back of the throat. That may be why it was easier for me to drink than say, gargling with salt water, which I hate to do.

The effect is fast.  About 15 minutes after I finished the quart of SWF, I was in the bathroom and pretty much staying there.  I washed my hands so often that the skin started feeling raw.  Other parts of me felt raw too but I’ll leave that to your experiential imagination and move on.

I didn’t have any of the actual Master Cleanse drink until over an hour later. I wasn’t feeling hungry.  (Funny, having diarrhea doesn’t make me feel hungry.)  But when I finally had my first sip I was both pleasantly and unpleasantly surprised. It tastes almost like a hard cider at first. Then the cayenne pepper kicks in.  I thought it might be too spicy for me (because when it comes to spicy foods, I am pathetic) but either I got used to it or my initial few sips were simply an unexpected reaction.

As you can see from the photo, however, I didn’t finish the gallon.  According to the book, you’re supposed to drink 8-10 8-ozs cups a day.  I simply didn’t do it.  It wasn’t that I wasn’t hungry but I don’t react every time I am hungry and consciously drank water between every glass of the concoction I drank because, doing a cleanse or not, I was determined to get in my daily amount of water.

I mustn’t have been feeling too bad because, not only did I not drink an entire gallon of the mixture, but I forgot to enjoy an afternoon cup of peppermint tea.  Maybe I won’t forget today.  We’ll see.  In the meantime, I begin day 2 and am already gaining some insight.  But I’ll share more about that tomorrow.
Posted by Satia at 8:35 AM 2 comments: 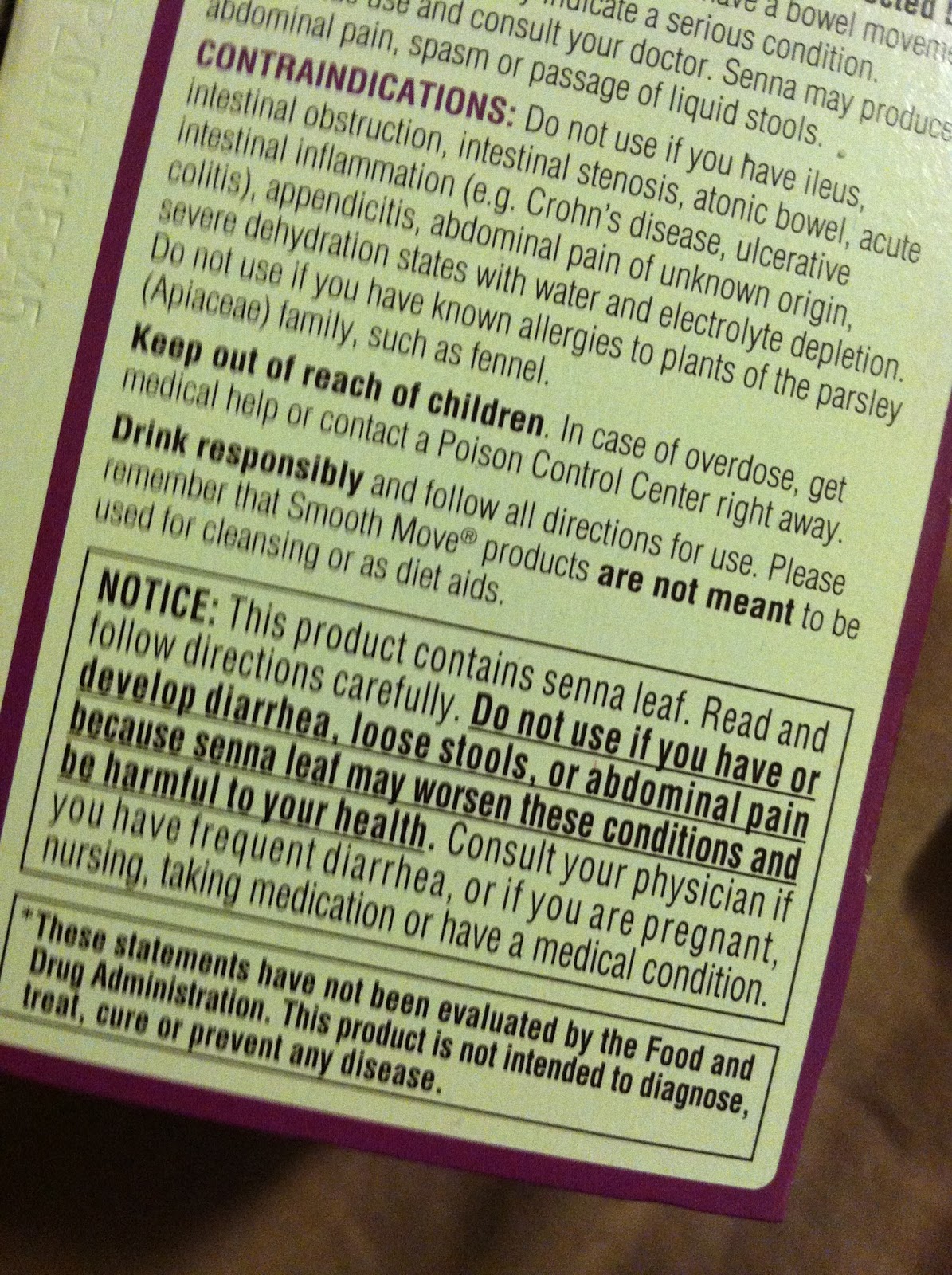 Today I officially begin the Master Cleanse and I'll write all about my full day's experience tomorrow.  But I thought I'd go ahead and share some of the preparation I did for the MC.  In her book, Westen suggests buying Smooth Move tea and having a cup the night before you start the cleanse.  I'd never had the tea before and I confess to not being the best tea drinker. I'm not a purist.  The idea of drinking plain tea--no honey or anything--wasn't exactly my cup of tea, if you know what I mean. But I am trying to write a fair review and that means doing what the book suggests.

Guess what?  The tea is actually quite tasty. I didn't add anything to it and was surprised by how naturally sweet it tasted.  I could easily see wanting to enjoy a cup at any time.  Only, you know, it's called "Smooth Move" for a reason and there are all sorts of warnings on the package about not overdoing it.

Now look closely at what it says on the box under Drink responsibly because I was surprised to see these words:  Smooth Move products are not meantto be used for cleansing or as diet aids.

Oops. I guess somebody didn't tell the author this or she didn't read the label. Nonetheless, I enjoyed my cup and will probably keep this tea around for those times when I need a little . . . loosening.

Anyway, before I went to bed, I mixed up my quart of salt water (2 tsps sea salt in a quart of water) and got a glass and straw ready for the next day. I also made up a gallon of the MC drink itself.  Yes, I knew I would be home and able to make it fresh throughout the day but I also figured that the less time I spend in the kitchen, surrounded with temptation, the better.

Temptation is part of the reason I chose to start this cleanse on a Thursday.  Rob is working.  I make his lunch but that is all.  I don't have to touch or be near food for the rest of the day.  And I've already warned him that I may ask him to make his own lunch.  We'll see how it goes.  I have all of my mental ducks in a row.  I do not have all of my food stuff ducks in a row.  But I'm starting.
Posted by Satia at 12:37 PM 4 comments:

Skeptical About the Master Cleanse 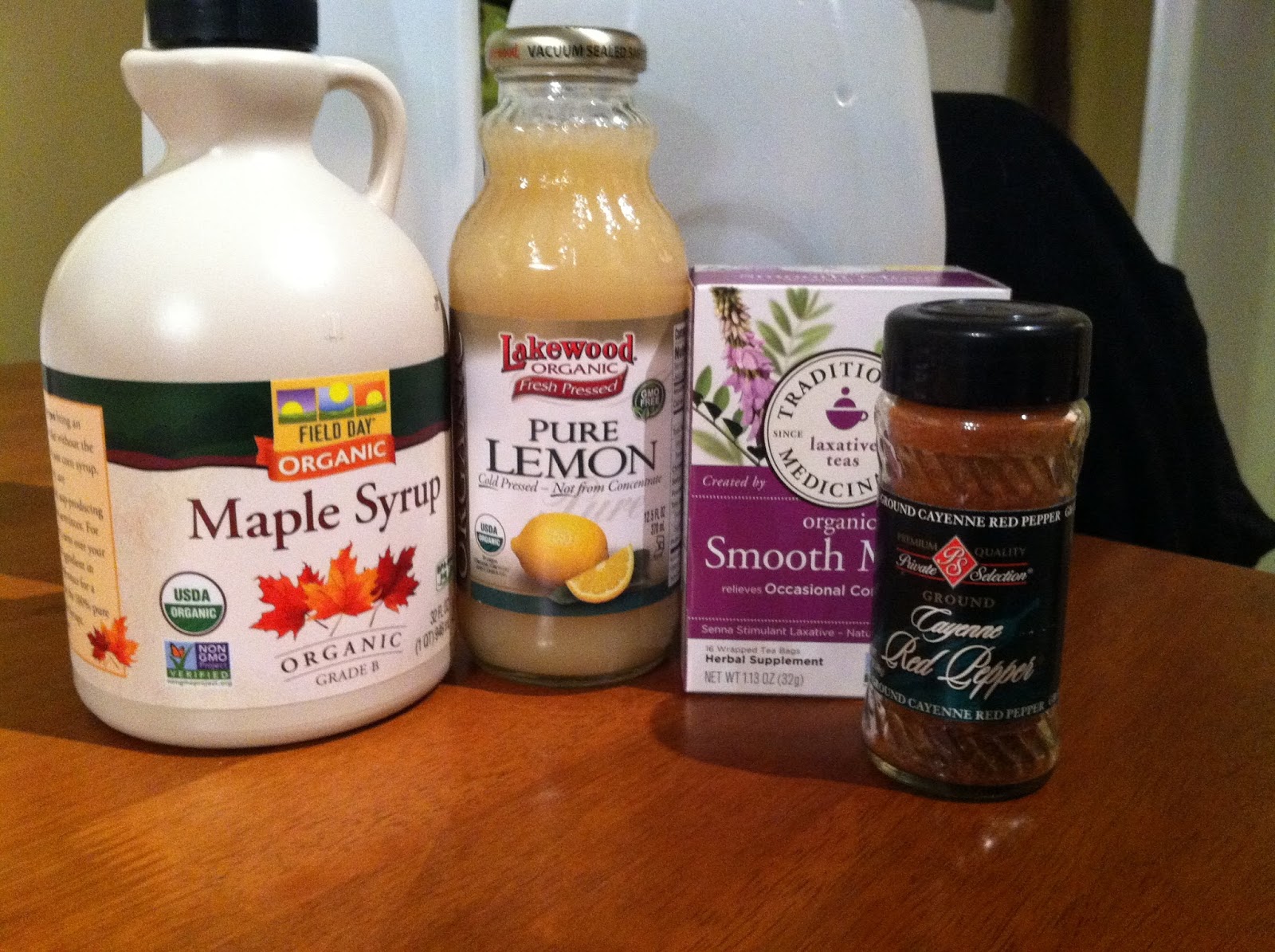 Tomorrow I start the Master Cleanse because I read and reviewed a book about it and figure that, to fully review the book, I should at least give it a go.  Truth is I’m skeptical.  I love doing juice fasts but this Master Cleanse doesn’t sound like much fun at all.  At least with a juice fast you have some variety. On the Master Cleanse you drink the same thing every day.  For ten days.  No wonder so many people are saying “I couldn’t do it” when I mention I’m giving it a try.  I’m not even sure I can do it but I’m going to give it my best effort.

And I want to write about the experience here in a my blog so let me tell you my first thoughts regarding this Master Cleanse.

I mean, holy cow!  I’m supposed to use fresh lemons, preferably organic. Guess what?  Lemons right now cost about $1 each.  And in 10 days I’ll go through between 60-80 lemons (or so says the book).  Then there’s the maple syrup.  I need 2 quarts of organic Grade B maple syrup.  It costs over $30 a quart.  That’s already over $100 for ONE person.  Add to that the cayenne pepper which, thankfully, we already had in the house, and the Smooth Move tea and let’s just say it—this is not a cost-friendly plan.

We ended up getting bottled organic lemon juice because it was cheaper than fresh lemons.  Sorry. Some compromises simply had to be made.  And we had to buy 7 bottles of the stuff anyway.  Ugh.  But I’m ready for it.

So yeah.  I may not buy into this whole detox thing and I am not sure how this is superior to doing a juice fast but I am curious and like the idea of its being a challenge, a way to physically push myself.  And maybe blogging about it will get me back in the habit of blogging, which is something I haven’t been doing lately. Feel free to join me in this, if you can afford it, or live vicariously through my blog posts.  I start tomorrow.
Posted by Satia at 10:07 AM 6 comments: