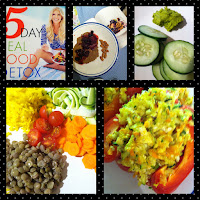 Of all the meals included in The 5 Day Real Food Detox, the stuffed bell peppers are not my favorite.  But that isn’t why I didn’t finish last night’s dinner.  I was too stuffed!  I just couldn’t eat another bite.  I didn’t immediately put the food away.  I thought this momentary fullness might subside but it didn’t so I packed up the leftovers and will eat them later this week.

That is not the most surprising thing for me about this detox, however.  The thing that amazed me most is that after the first time I did this, I finished and the next morning I made myself a cup of coffee but didn’t finish it.  I love my morning cup of coffee!  I realized a long time ago that it isn’t so much the coffee so much as the ritual of it, the slowing down to drink it.  But I have never found anything as gratifying as that first cup of coffee.  Still, for some reason, I wasn’t as enthusiastic about my morning cup after the detox.  Now that I’m doing it a second time, I realize that I like the hot cup of water with turmeric and cayenne and lemon that Nikki Sharp recommends.  She also recommends adding a dash of apple cider vinegar; from past experience, I find this too harsh for my throat so I leave it out.  To be honest, I also reduce the cayenne pepper to just a dash.

I think after this round of the detox, I will continue drinking the lemon water with turmeric and a dash of cayenne. I may even start making it with my ginger tea instead of just plain water.  And I may still end up making myself a cup of coffee afterwards. I just don’t know that it will be the first thing I reach for each and every day any longer.

I don’t care how healthy I strive to be, however.  I will never give up my pizza!  EVER!
Posted by Satia at 8:13 AM